Searching for the real crossroads in the Mississippi Delta 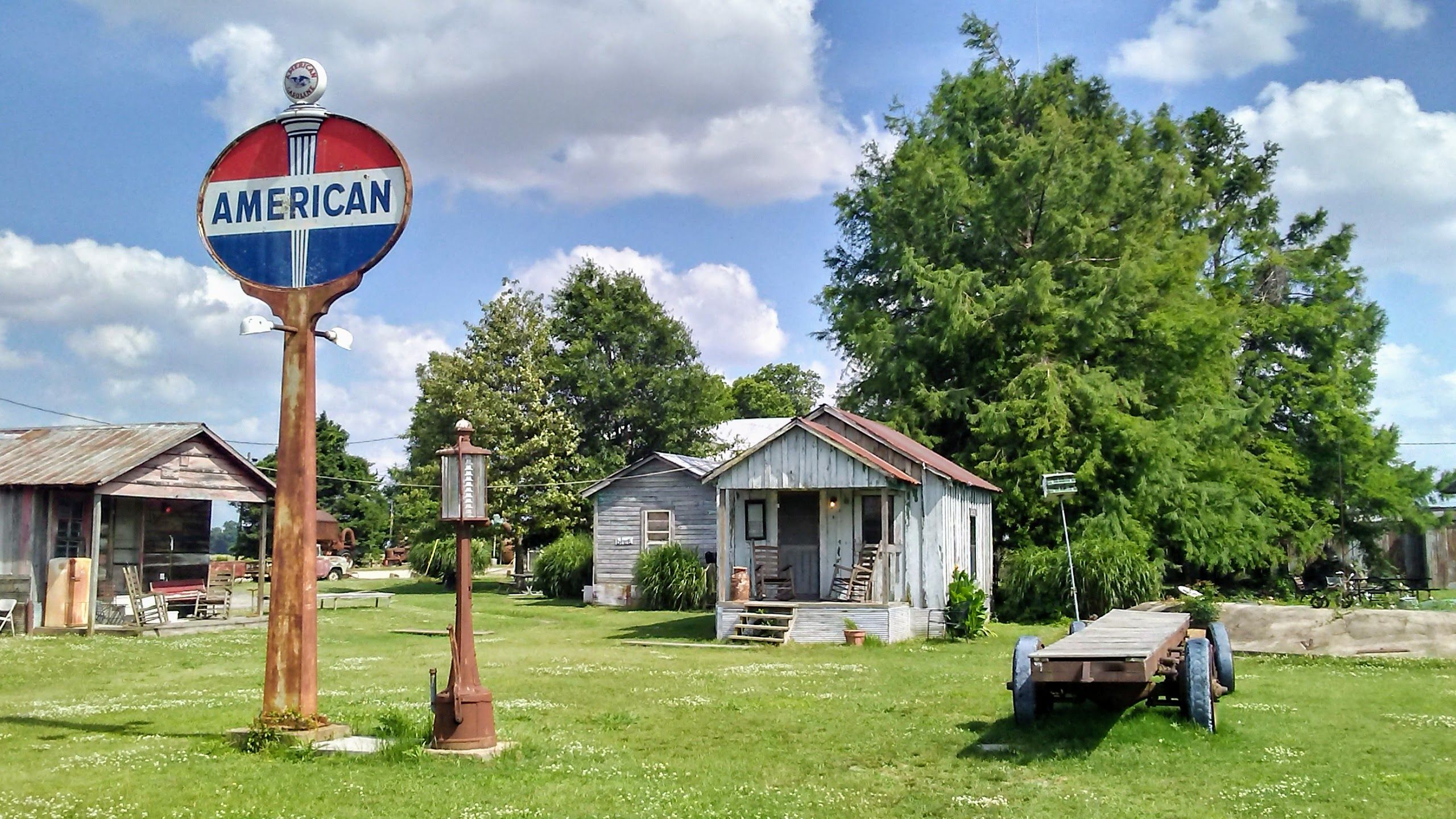 The grounds of The Shack Up Inn in Clarksdale, Miss. Photo by the author.

The Mississippi Delta is a place of legends, myths, and lore, much of it related to blues music.

Those familiar with the history of the blues know the apocryphal tale of guitarist Robert Johnson selling his soul to the devil at midnight at a Delta crossroads to become a master at his craft. The tale has been re-told in movies, books and songs so many times since Johnson’s death in 1938 that it’s hard to separate reality from myth.

The same could be said about the Delta itself, which isn’t actually a delta but an alluvial floodplain created by the meandering course of the mighty Mississippi River.

Located in the northwest part of the state, the Delta was created after the river was tamed by levees and a thick buildup of rich topsoil created an ideal environment for growing cotton. In the 19th century, the region was cleared of its forest by enslaved Blacks to make way for giant farms. Post-slavery, the fields were worked by Black farmhands, sharecroppers, and tenant farmers. The fertile land is vast, flat as a tabletop, and remote. Workers lived, toiled, and entertained themselves in relative isolation from the outside world. A distinctive culture emerged, one that included the sounds that would become known as the Delta blues. 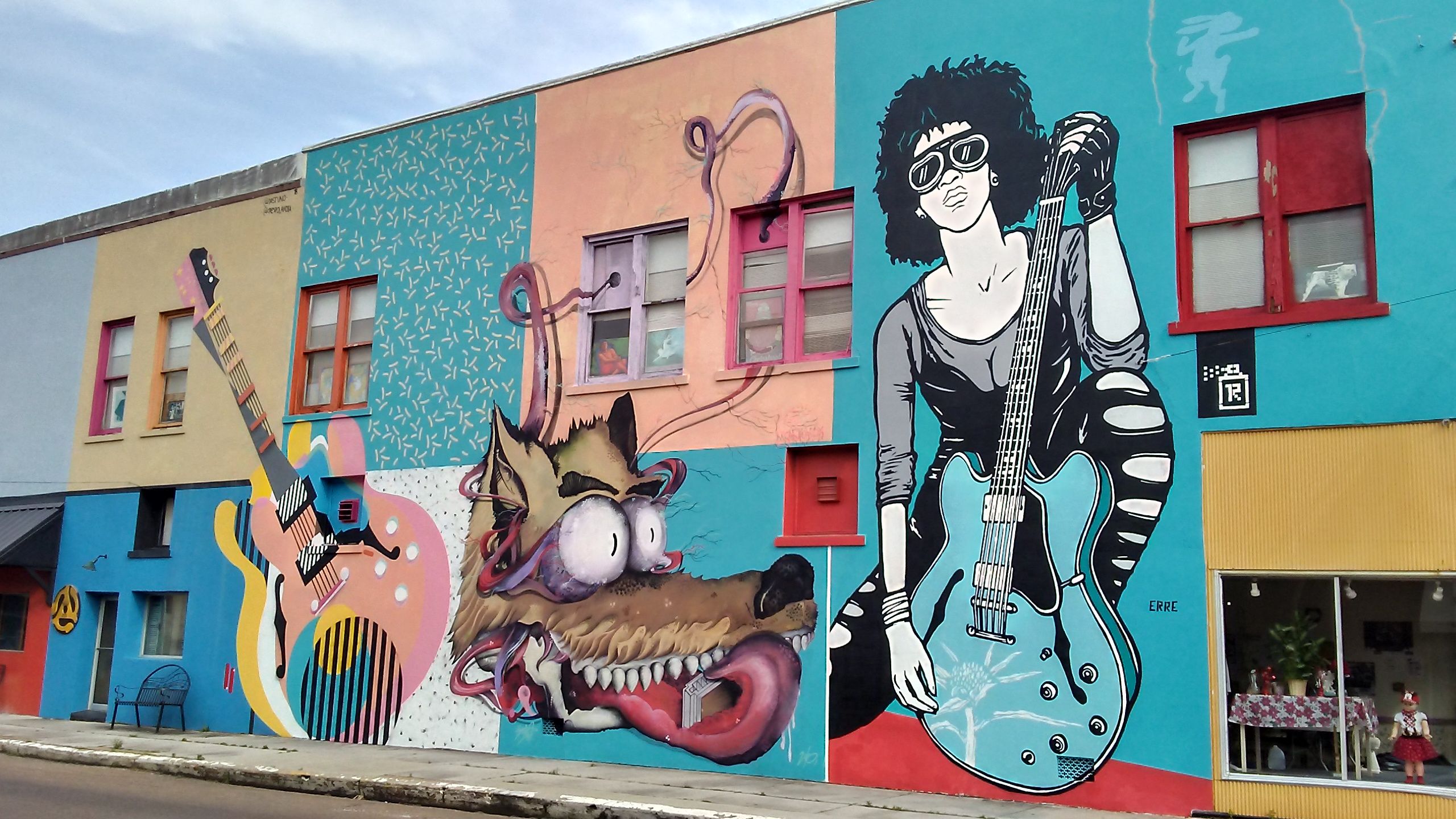 Murals in downtown Clarksdale. Photo by the author.

The mystical allure of the Delta is no more apparent than in Clarksdale, home to the purported crossroads of Johnson’s fateful meeting, at the intersection of U.S. 49 and U.S. 61, known as the Blues Highway. It is the logical place to start a tour of the area. It’s also the best place to stay while exploring the region.

No one I met in Clarksdale seemed to believe the fantastical Johnson tale, or, if they did, they say it happened somewhere else because the current intersection didn’t exist back then; it’s a newer re-routing of the two highways. One local pointed out the original intersection a few blocks away, now side streets without a marker like the one at the official crossroads, an oversized guitar sign where tourists take selfies.

Visiting for the first time, I expected over-commercialization and tourist traps. Instead, I found authentic, small-town charm and a downtown blissfully free of chain stores with no signs of gentrification. There also was a bounty of music, musicians, and music venues. Ground Zero Blues Club, co-owned by actor and Delta native Morgan Freeman, is one of the more popular clubs in the region, but if you're looking for an old-school juke joint vibe, the more-intimate, cash-only Red's Lounge a couple of blocks away is the place to go. 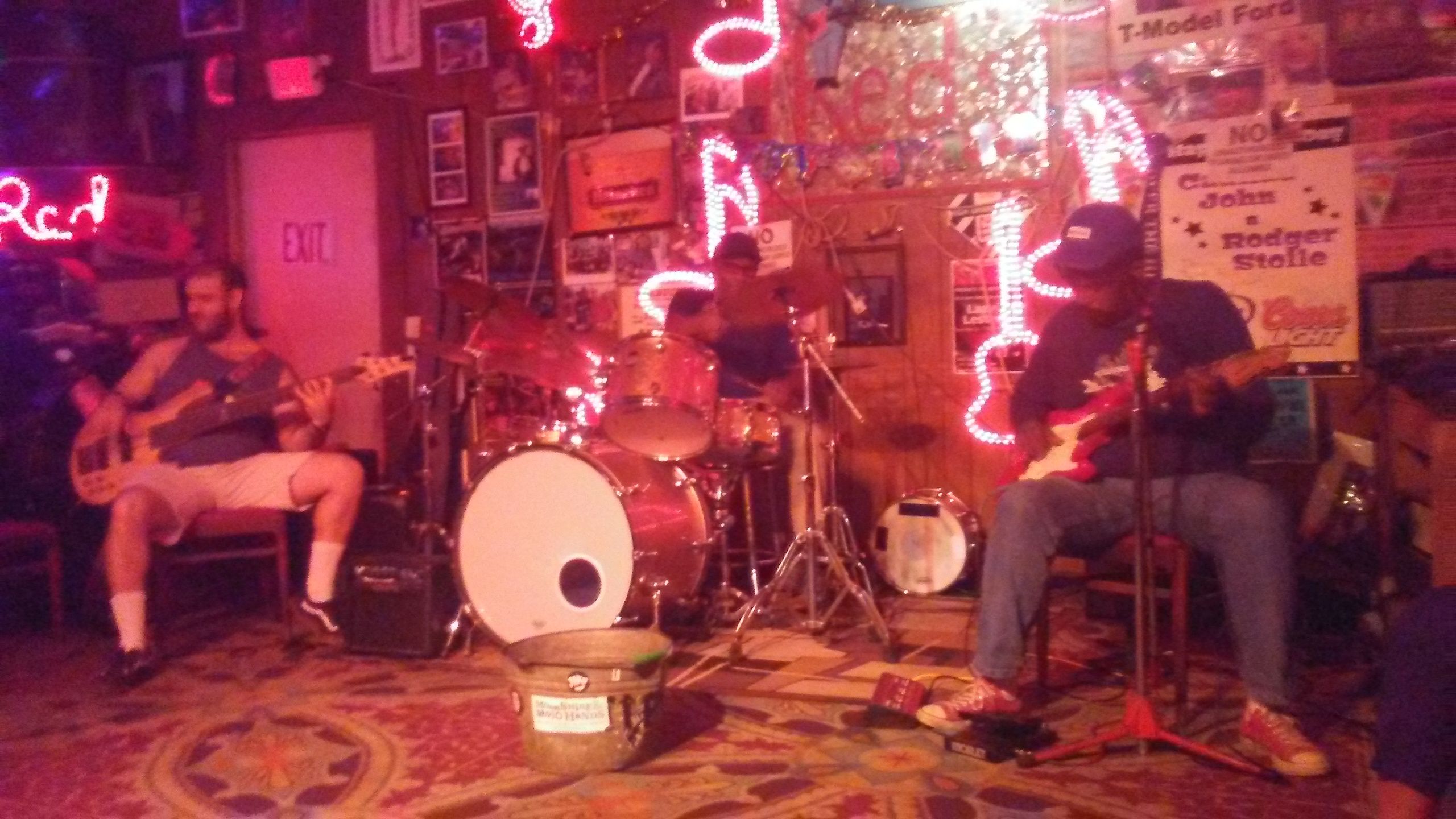 Music pilgrims come from around the globe to experience Clarksdale and the Delta. I encountered travelers from six countries during my visit, some were musicians, others just die-hard music fans. "Elegant decay" is a phrase that has been used to describe the town. Buildings with caved-in roofs sit next to locally-owned coffee shops, bookstores, and restaurants. A historic movie theater with a missing roof is now an open-air art and music venue called the New Roxy. Behind it is soul legend Sam Cooke's birthplace, according to a historical marker on the sidewalk. The marker is part of the Mississippi Blues Trail. Clarksdale brims with these markers, as does all of the Delta. For details on the trail, go to msbluestrail.org.

The Delta Blues Museum in Clarksdale is Mississippi's oldest music museum. It preserves the blues history of the area and contains remnants of the house where blues legend Muddy Waters grew up on Stovall Farms outside of town. The front porch of the cabin is where Waters made his first field recordings for the Library of Congress in 1941. After hearing himself sing and play guitar, the young musician realized he sounded as good as anyone else on the radio and headed north to Chicago along U.S. 61 to make his mark on music history.

Although Waters’ home is no longer located at Stovall Farms, it’s worth the 8-mile drive northwest of Clarksdale to see what a working farm in the Delta looks like. To the modern visitor, the endless rows of crops stretching toward the horizon presents an idyllic vista, but it’s also easy to imagine why people like Waters headed north once mechanization made many farmhand jobs obsolete. 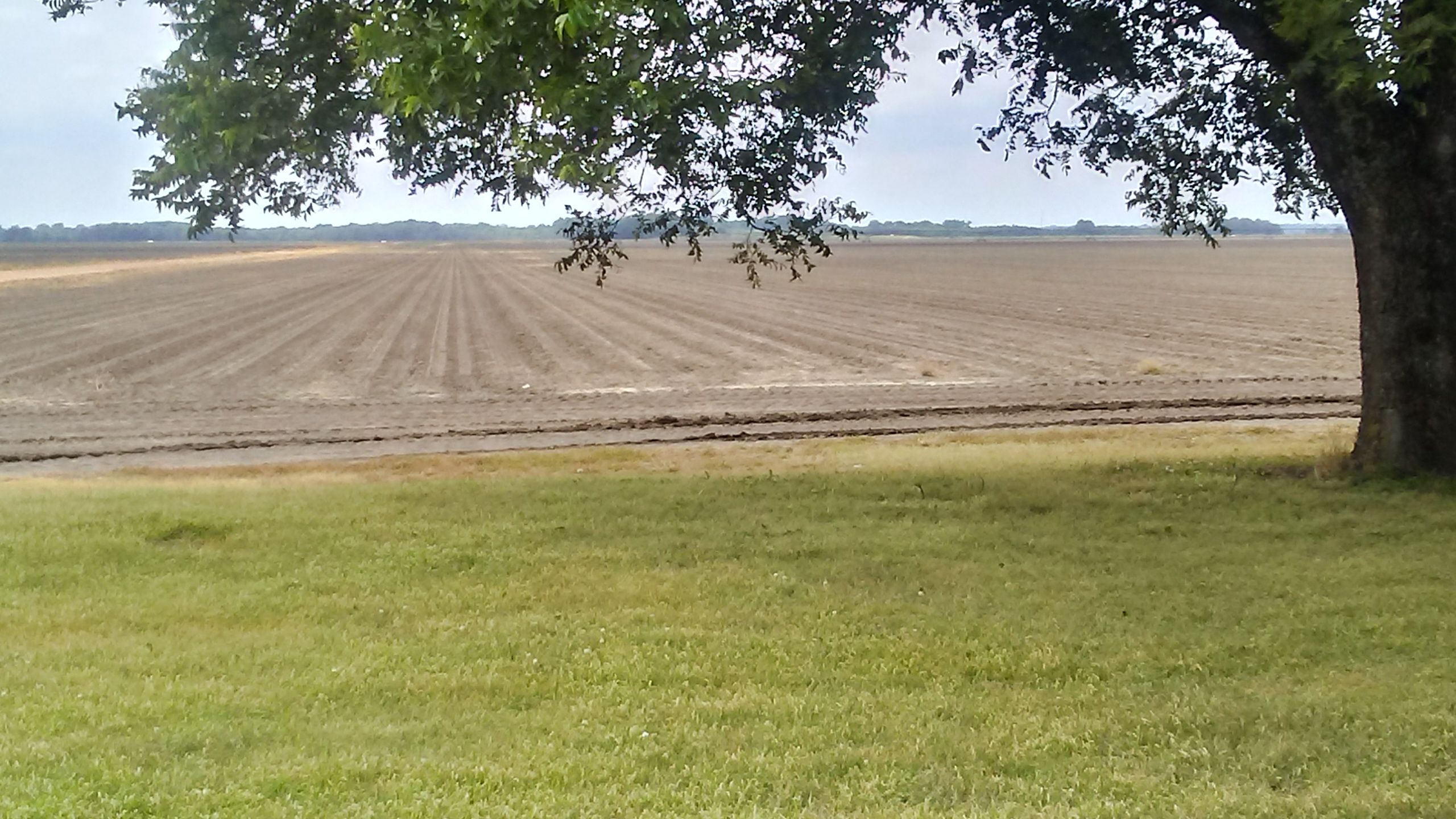 The view from the former homesite of Muddy Waters on Stovall Farms. Photo by the author.

South of Clarksdale 37 miles is the town of Cleveland, home of the Delta Music Institute at Delta State University and the first Grammy museum outside of Los Angeles. Grammy Museum Mississippi is an interactive museum where visitors can write, record, and play their own songs. Various exhibits provide information about Mississippi's many Lifetime Achievement Award winners, including B.B. King, who was from Indianola. Located 26 miles south of Cleveland, Indianola is home to King's gravesite and the B.B. King Museum and Delta Interpretive Center. Along with exhibits showcasing every aspect of King's storied life, the museum provides a detailed overview of early Delta life beyond the music.

One of the last stops on my tour took me back north, 7 miles east of Cleveland to Dockery Farms. B.B. King once said that Dockery Farms is where the Delta blues started. The Blues Trail marker here is titled “The Birthplace of the Blues?” That question mark speaks volumes because no one can really say for certain where the blues was born, but if B.B. King says it’s true, I’m paying attention. 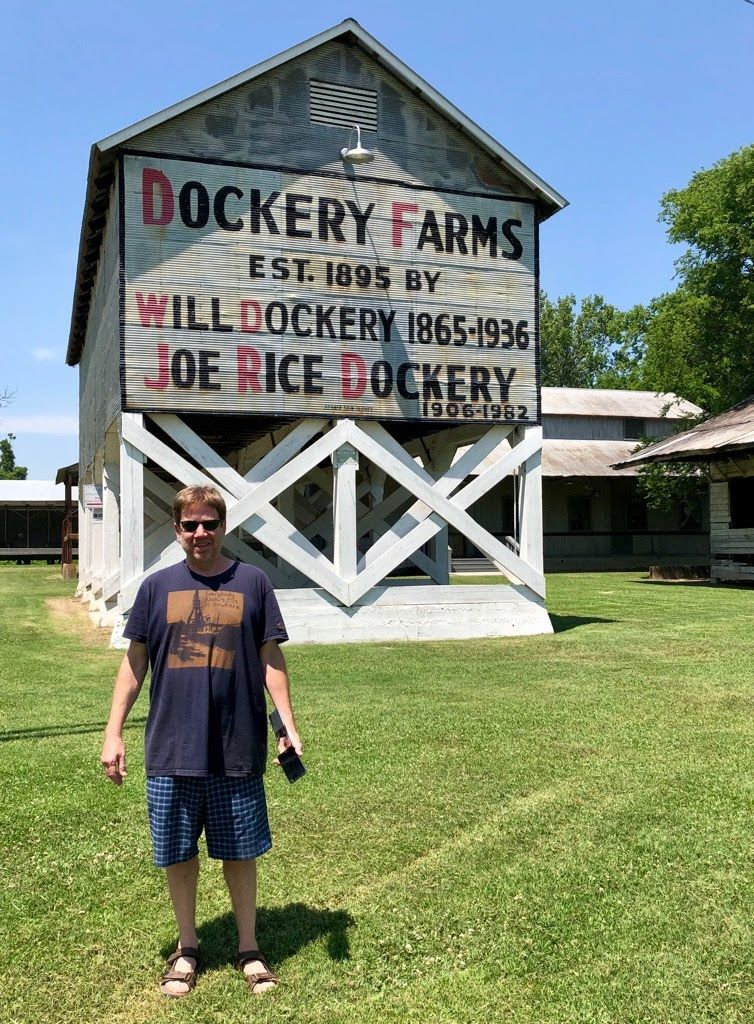 The author at Dockery Farms. Photo by Ruth Sykes

Dockery Farms was the domain of blues pioneer Charley Patton, a slide guitarist who influenced Robert Johnson and is considered one of the most important figures of the early Delta blues.

Bill Lester, executive director of the nonprofit Dockery Farms Foundation, gave me a tour of the grounds. The tales he tells could fill a book and have, but the one that stuck with me was his version of Robert Johnson and the crossroads. 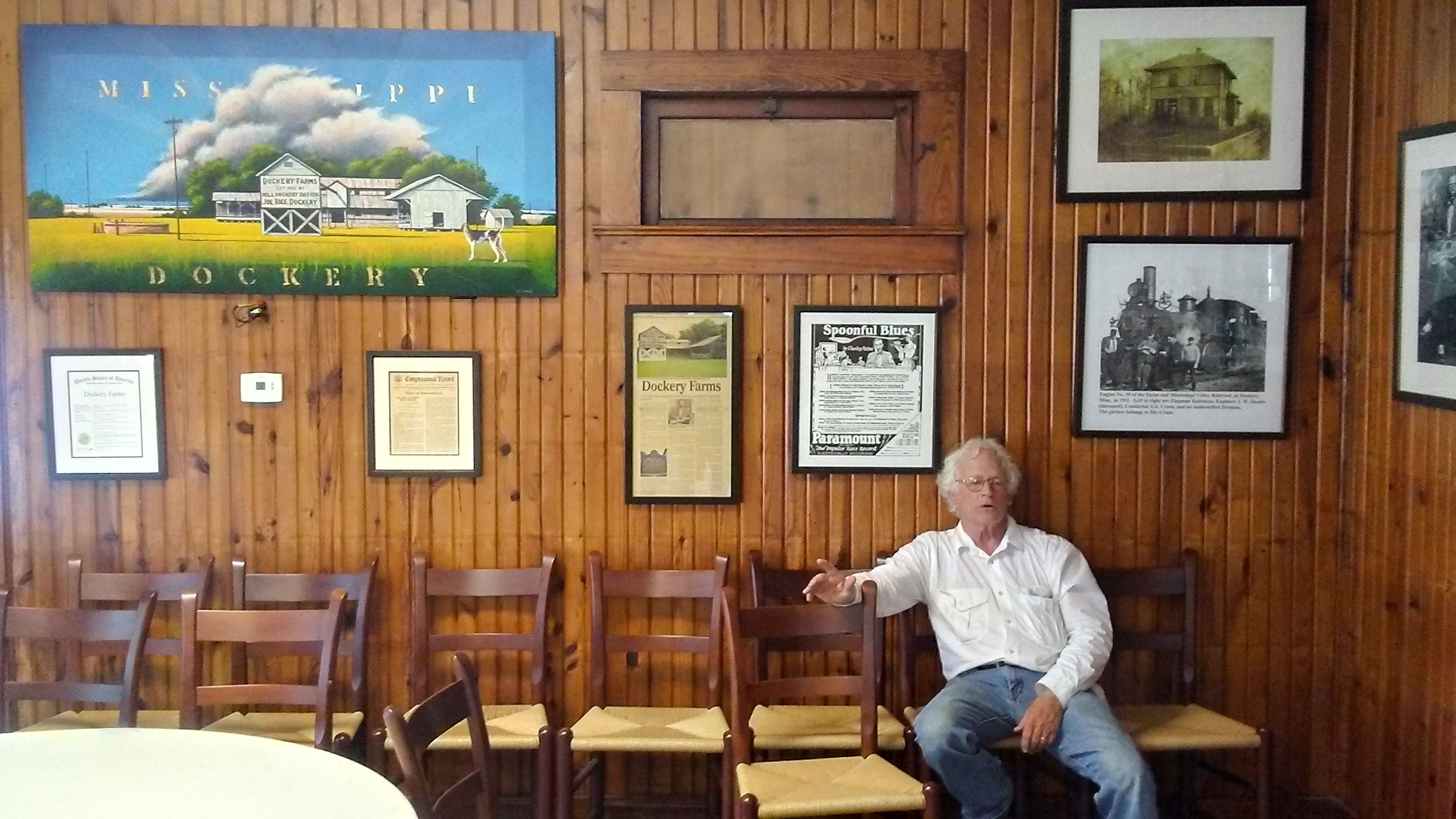 Bill Lester relaxing at Dockery Farms after giving a tour. Photo by the author.

Lester's theory is that the real crossroads is located across the highway from Dockery near the old train station. There’s no devil involved in this scenario, but it’s a more realistic story of a young man at a turning point in his life — at a crossroads, so to speak. As Lester tells it, Johnson came to Dockery and was laughed off the farm by the older guitar players. He didn’t return until he had acquired Patton-like skills. People were amazed at his improvement and joked that Johnson must have made a deal with the devil to have progressed so much in such a short period of time. Perhaps it was simply a case of practice makes perfect. But of the many crossroads the Delta claims, Lester’s Dockery theory makes the most sense to me. No road trip through the Delta is complete without a stop there, question mark or not.

This article originally appeared in the AJC but has been updated, and adapted for use here.