I first heard about Daufuskie Island in 2015 from a regular at a dive bar in Savannah. He saddled up on a barstool after overhearing me ask the bartender for recommendations on what to do while in town. Instead of telling me about Savannah, the regular told me about a nearby island at the mouth of the Savannah River in South Carolina with no cars or traffic lights. My ears perked up.

You can only get there by boat, the man said. People get around by bicycle and golf cart. They live the simple life in old cottages on shady lanes and there’s a strong Gullah heritage. It’s the island Pat Conroy wrote about in his first book, “The Water is Wide,” where he taught Gullah children in a two-room schoolhouse in the late 1960s. And the old haunted lighthouse on Haig Point has been restored so people can stay there.

I didn’t make it to Daufuskie on that trip but filed the information in my head determined to make a visit later if what the barfly had told me was true. All I knew for sure at the time was that Conroy did write that book, but the island was called something else — Yamacraw.

Fast-forward to 2020. After months of staying at home, I was ready for the coast but wanted to be safe and take a trip to a place where social distancing would be easy. The bells started ringing in my head. Daufuskie. I made the arrangements and was booked into the Haig Point Lighthouse. My fears about traveling during the coronavirus pandemic were somewhat alleviated after learning passengers were required to wear masks on the ferry to the island.

The public ferry leaves from the foot of the Hilton Head Island bridge and takes 45 minutes to reach Daufuskie. The private Haig Point ferry embarks from a different spot on Hilton Head for a 25-minute ride to its own dock on Haig Point. Either way, a scenic boat ride across the sound is an ideal way to wind down after the drive from Atlanta.

After disembarking from the ferry and getting my golf cart (essential for getting around on the island), I soon began to experience the simple life I had heard about. This is a place where people make turn signals by hand because blinkers don’t come standard on golf carts. Roads are generically named for what’s on them: School Road, Beach Road. One-word hand-painted signs in the shape of arrows are tacked to poles at every intersection leading the way to “Coffee,” “Church,” “Lighthouse,” and so forth, making it fairly easy to get around without a map. 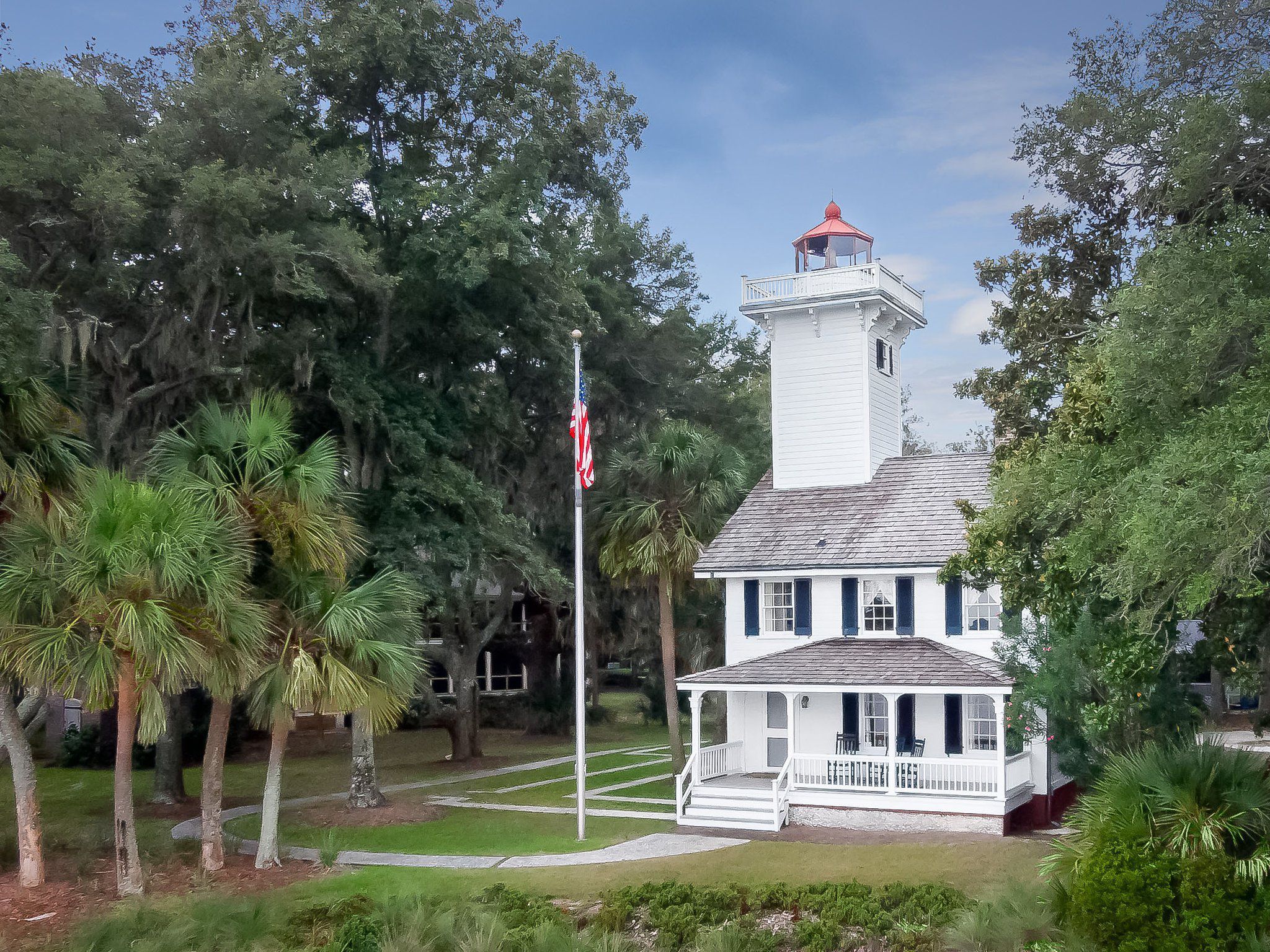 The Haig Point Lighthouse at the north end of the island is one of two historic lighthouses on Daufuskie, the other being the Bloody Point Lighthouse at the south end, now housing a small but worthwhile history museum. The one on Haig Point was constructed in 1873 and remained in use until 1934. In the 1980s the International Paper Corporation, which owned the property at that time, restored the tower and the keeper’s quarters underneath. It was listed on the National Register of Historic Places in 1982; in 1986 the U.S. Coast Guard authorized its re-lighting as a private aid to navigation in Calibogue Sound between Daufuskie Island and Hilton Head Island.

Today the lighthouse is part of Haig Point, one of three planned communities on Daufuskie bordering the Historic District. Haig Point is a private residential community, but visitors can book a “Stay and Play” package with accommodations in the historic Strachan Mansion (circa 1910) or the lighthouse. The package includes a golf cart, ferry tickets, a round of golf or a horseback ride on the beach, morning coffee and pastries, and access to Haig Point amenities such as tennis and a private beach.

I opted for the lighthouse because I wanted to stay on a solitary point overlooking the water. The front porch has one of the best views on the island. I spent a good deal of time in a rocking chair watching the dolphins surface and the boat traffic come and go through the sound. The tour boats would idle offshore gawking at the old lighthouse. I could hear the narration over the loudspeakers and see people looking through binoculars, probably wondering who I was sitting on the porch staring back and waving.

The lighthouse has been restored to look as it did in the 1890s. The attention to detail is striking, right down to the locks on the doors and the lamps hanging on the wall. In a closet, plexiglass covers interior woodwork with inscriptions from workers dated June 1873.

Tempting as it was to hang out on the point, the Historic District was calling, and I wanted to discover some more history. The island was once home to large indigo and cotton plantations. During the Civil War, the planter class abandoned Daufuskie. The former slaves stayed behind, isolated from the outside world, maintaining their own distinct Gullah culture and eventually making a living from selling oysters. Contamination from the Savannah River wiped out that industry in the mid 20th century, but many of the cottages from the oystering days still exist. These are the classic Daufuskie houses set back in the ancient live oaks dangling Spanish moss on sandy roads. 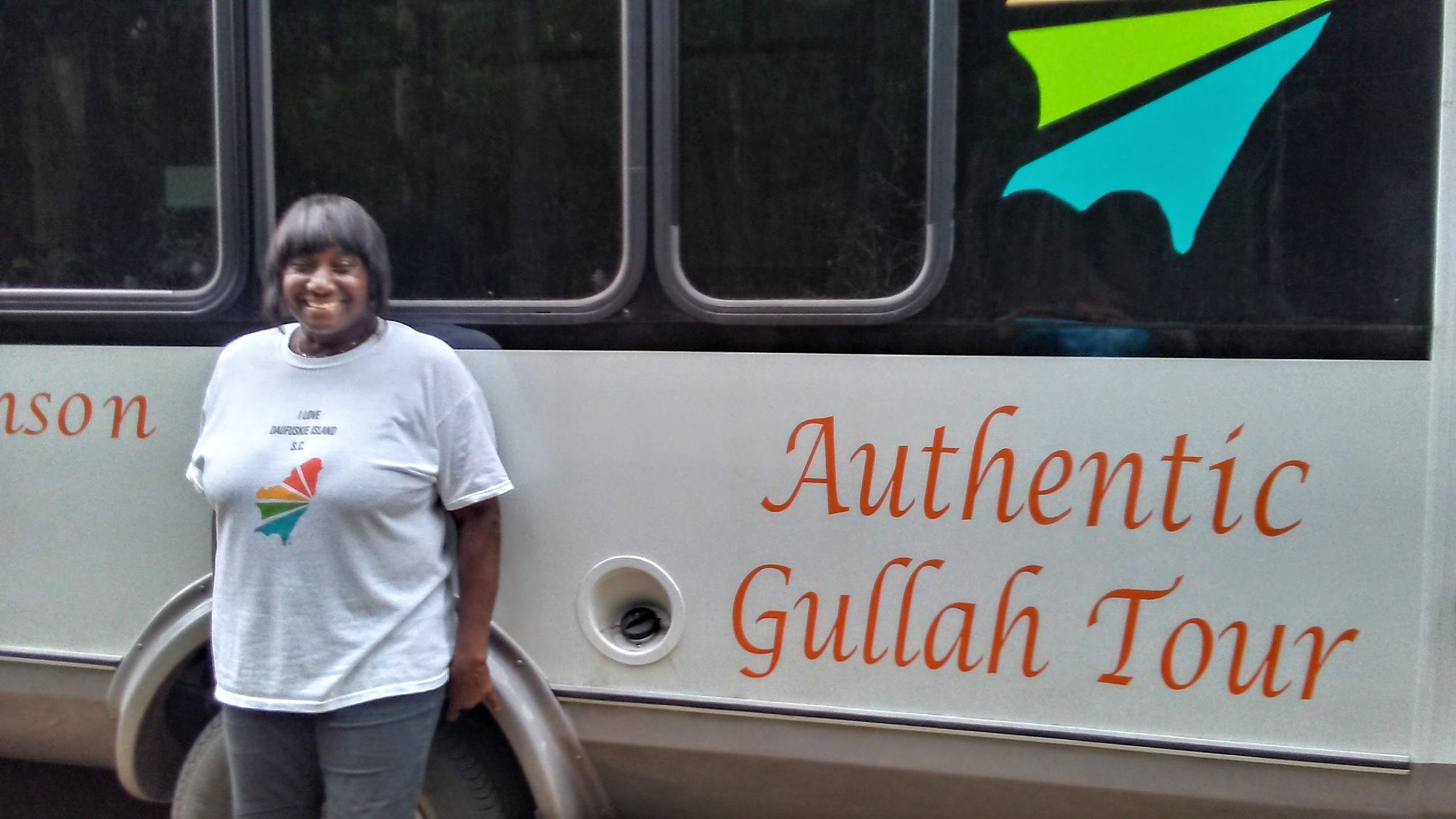 Sallie Ann Robinson, a sixth-generation native of Daufuskie Island, leads the Authentic Gullah Tour of historic sites aboard her air-conditioned tour bus. Photo by the author.

I met Sallie Ann Robinson, a sixth-generation Gullah native of Daufuskie, in front of one of these old houses near the Mary Field School, the schoolhouse where Pat Conroy taught. The first thing Robinson showed me was a Gullah version of the bible titled “De Nyew Testament.” Next, she handed me a copy of Oprah Winfrey’s magazine that included a story about her. Then she showed me a Gullah cookbook penned by her with a foreword by Pat Conroy. Robinson was one of Conroy’s students at the schoolhouse in 1969. He changed her name in the book just like he had changed the name of the island.

Sallie Ann conducts the Authentic Gullah Tour in association with the non-profit Daufuskie Island Gullah Heritage Society. The organization works to help restore the old Gullah homes and maintain the centuries-old cemeteries. Robinson’s three-hour tour through the Historic District provides a unique first-person perspective on Gullah heritage and other aspects of the island’s history. She’ll drive you in her air-conditioned bus (a rare automobile on the island) to the major historic sites and regale you with stories about growing up on Daufuskie before it became an off-the-radar vacation destination. She also talks a lot about Conroy, who she remained close with up until his death in 2016. The two often appeared at book signings and literary events together.

“They loved to have the two of us together because we were always so much fun,” she said.

A lot has changed on Daufuskie over the years, but some things remain the same. Driving back to the lighthouse in my golf cart I passed the schoolhouse and the church Robinson attended as a child. The schoolhouse is now home to a coffee shop and a clothing store, but the circa-1884 First Union African Baptist Church remains active and is still attended regularly by Robinson.